The first major public event to take place in Northampton since the easing of lockdown restrictions has been hailed a ‘roaring success’ – with business booming thanks to the visit of a pack of prehistoric dinosaurs.

Europe’s biggest T Rex was one of a number of dinosaurs wowing the crowds as thousands of families flocked to Northampton town centre on Saturday.

These percentage increases in footfall counts translate into thousands of extra visitors in the Market Square over and above pre-pandemic levels with many national and independent businesses also laying on their own activities and promotions to attract customers to their stores throughout the event.

Metro Bank gave out more than 300 craft bags to youngsters and reported a significant rise in visitors throughout the day.

The event also helped to draw people’s attention to the town’s independent shops, who relished the chance to get creative and come up with incentives to attract shoppers. 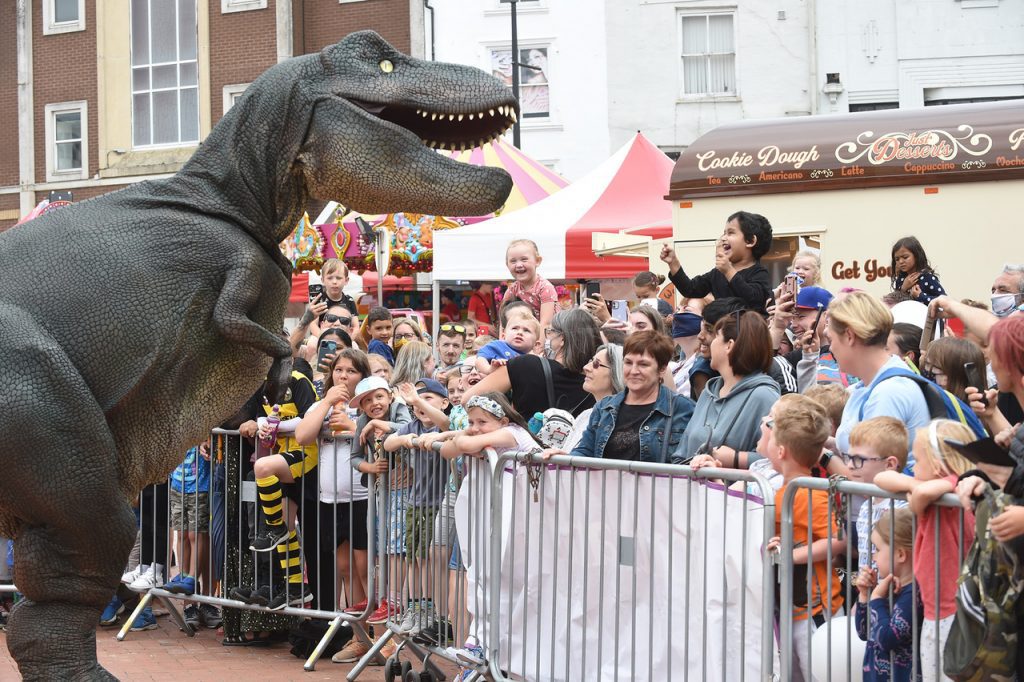 Olly Dier, owner of gaming shop and café Geek Retreat in The Ridings – which created a dinosaur-themed ‘Roarsberry Extinction’ milkshake for the occasion, said: “The event certainly brought people into the town. We saw a mix of new customers and familiar faces in the shop. It was nice to see an event in the town centre after so long in lockdown and I think similar events would do well.”

The dinosaur activities are being staged by Northampton Town Centre Business Improvement District as part of its ambition to make Northampton a better place to live, shop and work and form part of a refreshed calendar of activities to coincide with the relaxing of COVID-19 restrictions.

Mark Mullen, operations manager for Northampton Town Centre BID, said: “It was the busiest I have seen the town centre for a long time and a nice reminder of what life was like before all of the restrictions. Everything came together to make the event a success, including the weather. The town was absolutely buzzing.”

More than 300 families enjoyed an interactive ‘Dino Trail’ after downloading the Explore Northampton app. Users can continue to hunt for 10 friendly augmented reality dinosaurs which will come to life through smart phones in different locations around the town centre throughout the summer.

The free event kicked off three weeks of Jurassic-themed activities, and businesses are continuing to be involved over the next three weeks with cafes, restaurants and takeaways providing a range of ‘Dino Diner’ meal deals and special offers running in participating outlets until August 14.

The dinosaurs will return for a special ticketed performance at The Deco theatre on August 13 and 14.

For full information about the activities, Dino Diner meal deals and other special offers, visit www.discovernorthampton.co.uk/the-dinosaurs-are-coming-to-northampton-town-centre/.