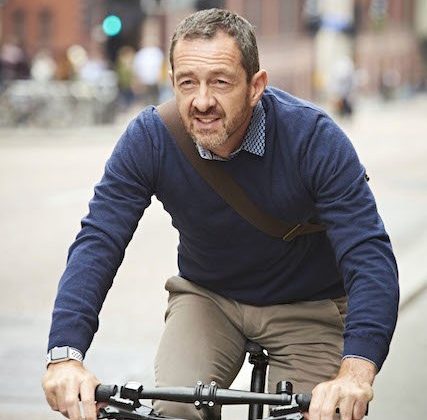 Northamptonshire’s favourite fundraising bike ride has received a massive boost thanks to a message of support from none other than former Olympic champion, Chris Boardman MBE.

The cyclist, who picked up Britain’s first gold – indeed the nation’s first in the sport for 72 years – at the 1992 Barcelona Games, sported the Tour de France yellow jersey on three separate occasions and broke world records no less than seven times, has now swapped professional pedalling for promoting the joys of life in the saddle and is urging all those with two wheels to sign up for next month’s Cycle4Cynthia, the biggest fundraiser in the calendar for the county’s Cynthia Spencer Hospice.

Alongside running his highly successful eponymous bike and performance centre businesses, Chris’ latest role as Cycling and Walking Commissioner for Greater Manchester sees his striving to ensure that those who live and work in the city have a viable and attractive alternative to using cars but, as he explains, he won’t be happy until that’s the national norm:

“I took part in my first bike ride aged 13 and spent the following twenty years at the very top of and while I am of course really proud of all my medals, achievements and accolades, I hope that one day I’ll reflect on how I was able to use my influence to make this country as cycle-friendly as possible” said Chris

“However, it’s not just about pressing for fewer potholes, more cycle lanes or lowering speed limits, it’s also about encouraging everyone to experience the physical benefits and mental wellbeing that come by being behind handlebars rather than the steering wheel. “I always say it’s amazing what you can discover just pedalling along and it seems to me that, with the added bonus of knowing you’re supporting the best of causes by entering this wonderful event, Cycle4Cynthia is the perfect excuse to do just that!” he enthused.

Cycle4Cynthia, which has swelled the Hospice’s coffers by more than £600k over the last 16 years, will go ahead on Sunday 20th September, with plans currently in place for a carefully controlled, socially distanced event at Lamport Hall. Alternatively, riders can also generously pay to enter but pedal their own route from their front doors.

Hospice fundraising manager John Helm says the team is monitoring government guidelines closely to ensure the safety of all of those taking part, which is why, after the challenges of recent months, he and his team are so thrilled to have the cycling champion’s backing:

“As one of the nation’s most talented and popular sportsmen, who is now as passionate about sharing his love for cycling as he was about winning titles and breaking records, who better an advocate for this year’s ride than Chris Boardman?!” said John. “Indeed, his endorsement could not be more timely because, with the cancellation of many of our fundraising activities during lockdown still taking its toll on our financial reserves, we really need all the support we can get right now and hope therefore that everyone will be inspired by Chris’ rallying call and sign up to take part” he added.

Proceeds from this year’s Cycle4Cynthia, which is again being sponsored by leading commercial law firm EMW, will help to fund not only the Hospice’s specialist end-of-life palliative care for its patients and vital support for their families, but also its Wellbeing service, which aims to help those with a life-limiting illness to live their life as fully as they can by helping to maintain their physical function and independence for as long as possible.

Entry is £15 for adults, £7.50 for children and £35 for families and riders are politely advised that, in the event of the centralised event at Lamport being cancelled, entry fees will not be returned and considered a generous donation to the Hospice.

To enter online, or for more about the history of the event, please visit www.cycle4cynthia.co.uk while you can keep up to date with latest developments, based on government guidelines, by liking the ride’s and Hospice’s pages on Facebook.

Meanwhile for further information, including details of the various ways in which you can support the Hospice during these challenging times, please call the fundraising team on 01604 973340 or email fundraising@cynthiaspencer.co.uk