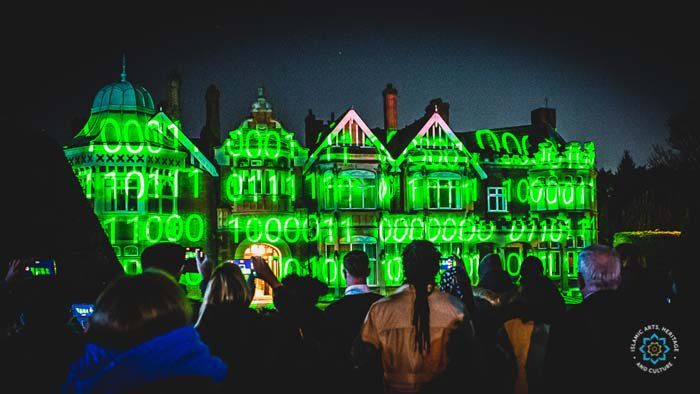 For three nights in March a spectacular light show lit Bletchley Park’s iconic mansion and grounds. The event, organised by Milton Keynes Islamic Arts, Heritage and Culture (MKIAC), celebrated the code, patterns and symbols found in both mathematics and Islamic Art, emphasising the common themes between the two.

The project was the idea of Anouar Kassim MBE, Founding Director of MKIAC who said “this was a team effort to celebrate how Islamic arts, culture and heritage played a part through early civilization in the creation of algebra. The word algebra comes from an Arabic word meaning ‘reunion of broken parts’ and the study of algebra flourished during the Islamic Golden Age when cultural, economic and scientific developments thrived.”

Students worked with MKIAC residential artist Maryam Smit and MK College to develop their art work and increase their knowledge of the geometry and mathematics involved in Islamic art. The Islamic Golden Age, from the 8th to 14th Centuries, has not only given us algebra and the numbers 1-9 but also the concept of zero and negative numbers and, in connection to cryptology, the notion of frequency and pattern. Creating Islamic art highlighted opportunities for new skill development for the students in the areas of coding, maths and digital. This is an area that can be developed far more to increase students’ understanding and awareness of how art, mathematics and the digital world combine.

Adrian Smith, Director and Chief Executive of the Alan Turing Institute, said of the Digital Light: Code Makers project “We are pleased to see the emergence of this project which links future digital skills to historic codebreakers such as Alan Turing and sheds light on the intriguing relationship between maths, art and creativity.”

Speaking at the preview night, MK Mayor Sam Crooks praised the project noting that it was important that he was there representing the whole of Milton Keynes at such an event. Noting the acheivements of the Golden Islamic Age he told the audience that he wanted to see the civilisation, heritage, insights, perceptions and concepts of that Age become part of the already rich heritage of Milton Keynes so we all share it.

The importance of partnership working in the creative sector was highlighted on the preview evening by Professor Kamal BechKoum, Head of Computer Science and Innovation at Gloucestershire University. An internationally experienced senior leader and academic in Higher Education, Professor BechKoum is also Director of the University Cyber Security Centre and the University lead for the National Institute of Coding, working with organisations such as Raytheon, Qinetiq and GCHQ to produce highly skilled business and technology professionals.

Chris Holmwood, Headteacher at Shenley Brook End School said “The symbolism, diversity and creativity was very powerful indeed and it was such a great opportunity for the students involved”.

Anouar Kassim MBE said: “Digital Light: Code Makers was an amazing project that was rooted in the community of Milton Keynes drawing links to the local heritage of Bletchley Park. The imagery was incredibly vibrant and exciting with up to 1000 people witnessing the installation projected onto the iconic Mansion.

“We are pleased to have received support and sponsorship from City Fibre and Milton Keynes Business Leaders Partnerships, but know that even more can be done with Business Communities particularly in working towards Inclusion and Diversity. This project highlighted the importance of partnerships working with the creativity sector – as mentioned by Professor Kamal Bechkoum in his preview evening speech.

We are enthusiastic about the joint benefits of partnership working, which may include support from us for delivery of diversity and inclusion activities within companies and organisations as well as involvement in potential future MKIAC digital projects, and I ask anyone interested to get in touch.

“We hope that as the country faces much crisis in the days and weeks ahead, we are sending out a positive message of peace, unity and collaboration within our communities.”

A video of Digital Light: Code Makers can be see on MKIAC website at www.mkiac.org/projects/community-programme/ by following the ‘Digital Light Codemakers’ link.

To find out how your company or organisation and MKIAC can work together please contact us at mkiac@mkcollege.ac.uk or via the contact page on our website.