Skilled engineer James was working from a converted barn at his home in Lancashire, supported by wife Elaine as Marketing Director, and making high-quality components for manufacturers. Spurred on by his experience in manufacturing gun parts while living in Australia, and a casual conversation with a friend, James turned his attention to producing an innovative English shotgun of uncompromising quality.

In order to maximise the company’s plans for growth and development, in 2015 the couple decided to move away from their home production unit in a small Lancashire village and move to Northamptonshire.

Not only did the move increase production space to around 12,000 square feet, assembly and office space to 2,000 square feet each, it also brought the company to a more central location, closer to the London market and improved accessibility from across the UK and internationally, positioned as they are in Millbrook Close, Northampton, close to excellent road, rail and air links. 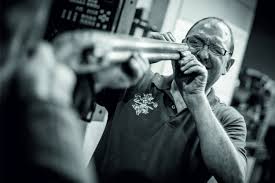 Elaine said: “The company was doing well, but we liked the idea of making a product and seeing it through to completion. When you manufacture parts for other manufacturers, you rarely see the end product. A friend mentioned the idea of producing shotguns. James is from a farming background, so he was familiar with guns, and shooting and the seed was planted!”

There are several shotgun ‘brands’ in the UK, each following a similar conventional production method when it comes to their barrel manufacture. James, on the other hand, identified what he considered to be flaws with the conventional method and began working on a process of making barrels from a single piece of high specification steel, resulting in barrels that are both durable, light in weight, proofed for steel shot and have excellent handling.

The Longthorne process of manufacturing from a solid block of steel rather than fabricating from several pieces eliminates the need for a heavy soldered centre rib, which allows additional weight to be added to the barrel wall thickness, which, combined with the specification of the metal, gives a barrel that is considerably stronger than average.

The most significant feature of the guns is that they have negligible recoil even with the most substantial shot loads. The barrel length and the top rib can be tailored to specific requirements during manufacture, to be best suited to game or clay shooting depending on the customer’s preference.

“Once we’d perfected the design and production method of the barrels, we secured a UK patent and subsequently further patents in the USA and most of the significant gun producing countries around the world to protect our processes and product. Our guns are all made in our Northampton factory, and we don’t buy in any components from overseas.”

Besides their UK market, the company has a growing export market and to date have sold to customers in the USA, Canada, Australia, New Zealand, Egypt, Barbados and several European countries. 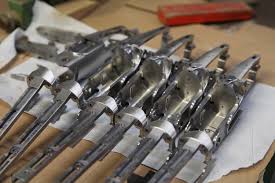 Production of a bespoke gun begins with a visit to the Northampton factory during which time customers are able to tour the factory and then discuss their various preferences such as barrel length, choking, stock and forend shapes, choice of wood and engraving design are discussed. A specification sheet is completed, along with a quotation. Once the order and deposit are received, work starts on the individual parts and any personalisation or a bespoke engraving design. When the barrels and action are ready they go for proofing at the London or Birmingham Proof house, after which the barrels are blackened, then the engraving completed and assembly of the gun begins.

Longthorne also does all its stock fitting in-house once the stock blank is roughly machined ready to go onto an action. The fitting usually takes one and a half to two hours, during that time the stock blank will be hand-shaped to ensure that when customers mount their gun, the point of aim and the position of impact should coincide. Careful consideration is given to the length of the grip and diameter of the wrist, trigger finger positioning, comb height and cast. The stock can be tailored to the particular discipline, whether game shooting, sporting, or trap.

It wasn’t all plain sailing in the early days, with Longthorne Gunmakers coming up against some resistance from the more established brands as a result of their innovative methods. Still, once customers liked the result, the company knew they had a successful future ahead.

Elaine added: “We have two different models, a sidelock gun which is bespoke and can take anything up to ten months to produce to customers’ specification. We also offer a boxlock gun; these are less bespoke, and we are currently working towards producing stock of our boxlock range to distribute to retailers. Although lockdown has put the brakes on a little, it has allowed us time to concentrate on the development of our boxlock range and ensure that once normality returns we will be in a position to hit the ground running.”

In 2011, Longthorne was commissioned by the Duchess of Rutland to make four guns celebrating the heritage of Belvoir Castle in Leicestershire. Taking inspiration from the castle and what it represents, the Rutland guns incorporate the Manners family crest, ducal coronet and the peacock which symbolises Belvoir Castle itself, combined with florets and scrollwork found within Belvoir. Longthorne was subsequently mentioned in the Duchess’s book Shooting, A Season of Discovery (2012). Later that year Elaine Stewart accompanied the Duchess on her book launch tour of New York and Dallas.

Truly a family company, James and Elaine’s daughter Chloe brings her natural artistic talent to the company as Director of Creatives. She developed the marque’s distinctive engraving designs, initially with mentoring from one of the UK’s most respected engravers, gradually learning her craft. Her work flourished, and she is now an integral part of the company, responsible for all the engraving designs, which can include anything from a bespoke design to personalisation of an existing style.

With the Stewart family at the helm, the factory also boasts a dedicated and highly skilled small team that ensure the craftsmanship at the heart of Longthorne Gunmakers is carried through all orders and production processes. A combination of product management expertise, engineering skills and ongoing training ensure the standards are maintained. The enthusiasm for producing high-quality work is always at the forefront.

Plans are in hand to take on two young people who approached the company after a presentation at a local college before COVID-19 and asked directly for jobs. The directors are keen to bring the pair on board once production steadies again as lockdown restrictions ease and the world of business gets onto an even keel.

“We have a small enthusiastic team who are dedicated, and they understand the special nature of what we produce,” said Elaine. “We make something that always puts a smile on the customer’s face. Most of our customers like to come to the factory, meet the team and see where and how we make their guns, it’s something very special to them. When we hand over the gun it is a joy to see the look of excitement when they hold it for the first time, and we see how pleased they are with it. There’s a true pride among the team in what they have created and what pleasure it is giving the customer.”

Find out more about Longthorne Gunmakers at www.longthorneguns.com or call 01772 811215.