He’d be forgiven for thinking “if my friends could see me now” when he’s cutting the hair of some of the region’s biggest sporting heroes, but lifes not like that for Lewi Williams. His friends are all around him, playing an enormous part in the success story that is Hendrix Barber Co.

At just 26, Lewi is living his dream. He owns two barbershops that very much reflect his ethos and personality, and together, Lewi and his team are building a reputation not just for great haircuts, but also for the best barbershop experience combined with excellent customer service.

So much so that customers range from regulars just popping in for a tidy up to a host of big names from rugby, football and cricket – where word of mouth counts for a great deal. In fact, when the England rugby squad were preparing for the World Cup last year, Lewi was whisked off to Pennyhill Park in Surrey, the team’s base for the tournament, to do 22 haircuts for the country’s finest.

“When I was working for a barbers in Northampton, some of the Northampton Saints players were customers, and I made sure they felt comfortable and welcome and I became friends with a few of them,” said Lewi.

“A lot of them stayed with me when I moved on, and they told their teammates, and their friends in football and cricket, and it went from there. I’ve cut the hair of the likes of Courtney Lawes and George Ford, and now count Teimana Harrison and Lewis Ludlum as good mates of mine. It was Lewis’s call up to the England World Cup squad that led to me joining them to help them get ready for the tournament, which was just a crazy day.” 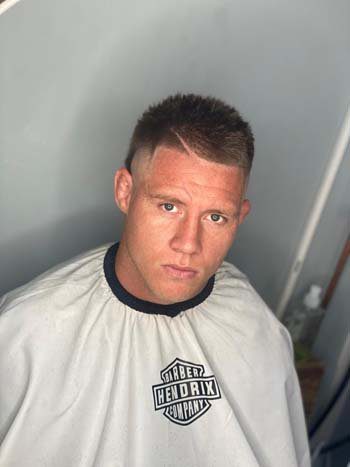 Lewi had begun cutting hair when he was a young footballer, playing on semi-pro terms for AFC Rushden and Diamonds. Fascinated by hair styles himself – and having tried most of them out over the years  he honed his skills on his teammates using his first clippers, a pair from Argos with Union Jacks on them that had been a gift from his step mum.

Sadly, his playing career was cut short by injury, but soon after realising he needed to move on, he went for a haircut and ended up being offered a job – setting up on his own a year or so later.

“I didn’t get off to the best start from a business point of view,” said Lewi. “I’m a council estate kid and although my family are incredibly supportive, there was no money to help set me up and I made a few decisions that didn’t work out particularly well for me. But by the time it was clear that the only way forward was to do things on my own, I’d learned an awful lot about how to run a business.

“Now, with backing from my ‘silent’ partner Ben Joyce I am in full control. I set up Hendrix Barber Co in Wellingborough just over a year ago and it was so successful that six months after I did that, I was able to go back and buy my previous place, No 11 in Earls Barton when it came onto the market.”

The Wellingborough barbershop is named after Lewi’s three-year-old son, Hendrix, another nod to the family values that are so important to him. He insists on creating an atmosphere that appeals to everyone, and that every customer gets the same level of service. And that everyone pays £15 for a cut, no discount for World Cup stars!

And Lewi is proud that his two best friends, Dillon Hills, who runs the former No 11, now Hendrix Barber Co in Earls Barton, and Josh, who only became a barber a year ago, are part of the team. As well as Dillon and Josh, there are three more barbers making up the ‘family’.

“Dillon and Josh have been my mates for years, Dillon has always been a barber, but Josh was in sales until I convinced him to learn to cut hair. He’s a good barber, and he’s a good people person, his customers love him,” said Lewi.

“I always call it a family business because we all work so hard and are together for such long hours that work is our social life as well. When we do have downtime, we’re usually together at my house having a barbecue or a get-together in the garden. They’re my best friends and that’s the atmosphere I like.” 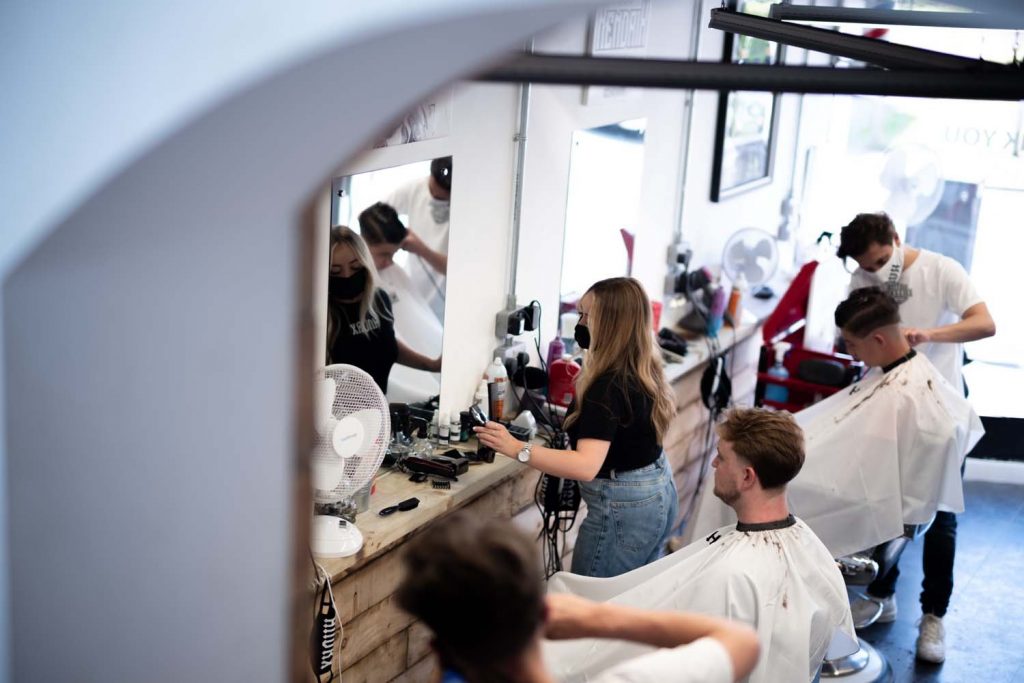 Hendrix Barber Co also has its own clothing range, Hndrx, and Lewi is currently working on developing a hair styling product range under the same brand.

“The last few years have been crazy and I am so happy with what we’ve all achieved together,” he said. “My only regret is that my mum, who died when I was young, isn’t around to see what I’ve done. That I’ve had my ups and downs and made something out of it all – that would make her proud!

“I still have ambitions of course ” I’m a massive Spurs fan and although I’ve cut the hair of loads of sportsmen, I would just love to get a couple of the Tottenham players in here. That would be fantastic!”

To find out more or book a cut visit www.hendrixbarberco.co.uk.