Having originally been appointed in May 2005, Mike had to wait over three months before his troops took to the field for the first time, which finally came on the opening day of the 2005/06 campaign with an away trip to Otley RFC on Saturday, September 3, 2005.

Bedford Blues started the Rayer era with a battling 16-all draw but showcased an evident change in playing style as the free-flowing, attacking hallmarks of a Rayer side quickly became obvious with an emphasis on speed and ambition. This was the first example of a renowned style the club have become so accustomed to over the years.

A total of 470 games have come and gone since Mike returned to Goldington Road, taking his involvement in rugby to well past the 1,000 match mark when adding the 62 appearances he made for Bedford during his playing days, the 367 appearances for Cardiff and the 21 international caps. This adds to the whole host of matches he was involved in as a coach with Cardiff, before his move back across the Severn Bridge.

Rayer has his name etched into the history books from his playing days at Goldington Road, having become the first rugby player to move clubs for a transfer fee ahead of his first arrival at the club in 1996. He spent two seasons as a player, kicking 731 points.

Reflecting on his years as Director of Rugby, Mike commented: “It doesn’t feel like 15 years, it’s gone quick that’s for sure. I can still remember getting on the bus to Otley having never been there before in my life, it’s a fantastic setting for rugby and a place with a lot of history.

“I came to Bedford in 2005 to coach ‘real men’. There were players like Jon Phillips, Matt Volland, Matt Allen with huge amounts of experiences and had played a lot of games previously for Northampton Saints, so it was quite daunting at the time.

“With my philosophy on rugby and coaching, it became an easier transition in the sense that I wanted to play the game and we had a squad that understood how I wanted to approach things.

“Over time, I’ve always fought to try to keep that close relationship with the players because you go through some challenging moments, testing moments.

“The challenge as you get older is that connection you try to keep with the younger players and how they work. Google doesn’t solve everything on a rugby field so you have to create the situations that hopefully players will encounter and overcome when they cross the white line.”

There have been many highlights to remember since Mike returned to take over in 2005; including, but not limited to, Ali Hepher’s dramatic drop goal against Exeter to send Blues to Twickenham in Mike’s first season, various play-off expeditions and the Blues Family will never forget that 53-52 thriller against Coventry last year.

A brief statistical analysis from Rayer’s time in charge at Goldington Road shows:

To hear Mike Rayer talk more about his time at Bedford Blues, head to the club website to listen to the latest edition of the Blues Podcast – Sam Roberts leads the conversation as Mike recounts some personal memories from matches over the years, www.bedfordrugby.co.uk 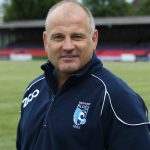