Northamptonshire’s favourite annual fundraising bike ride, Cycle4Cynthia, is used to having the backing of hundreds of local cyclists, but the Covid-induced cancellation of this year’s planned event at Lamport Hall has meant that those from the other side of the world have also been leaping into their saddles for this most deserving of causes!

The ride, which raises thousands of pounds for Northampton’s Cynthia Spencer Hospice every year, couldn’t take place last Sunday, with those with two wheels instead challenged to pedal anywhere, anytime and anyhow throughout the month of September, so enabling regular Cycle4Cynthia participant Andy James to reach for his two wheels, despite now living in Shanghai!

Andy, who first rode in the event back in 2010, recruited his four-year-old twins Oliver and Finlay to join him on his pedal around some of the city’s famous landmarks and says that, despite now being thousands of miles away, it remains a cause dear to his heart: “When I worked in Northampton, I used to be part of my company team which rode in memory of our factory manager after he spent his final days at the hospice, so I know what an amazing place it is and just wanted to show my support from afar” explained Andy.

‘The boys love being out on their scooters too and they’re just beginning to learn how important it is to think of, and care for, others, so it was great to pass on the Cycle4Cynthia bug to them for the first time and hopefully they’ll take part for many years to come, wherever they may be in the world!” he added. 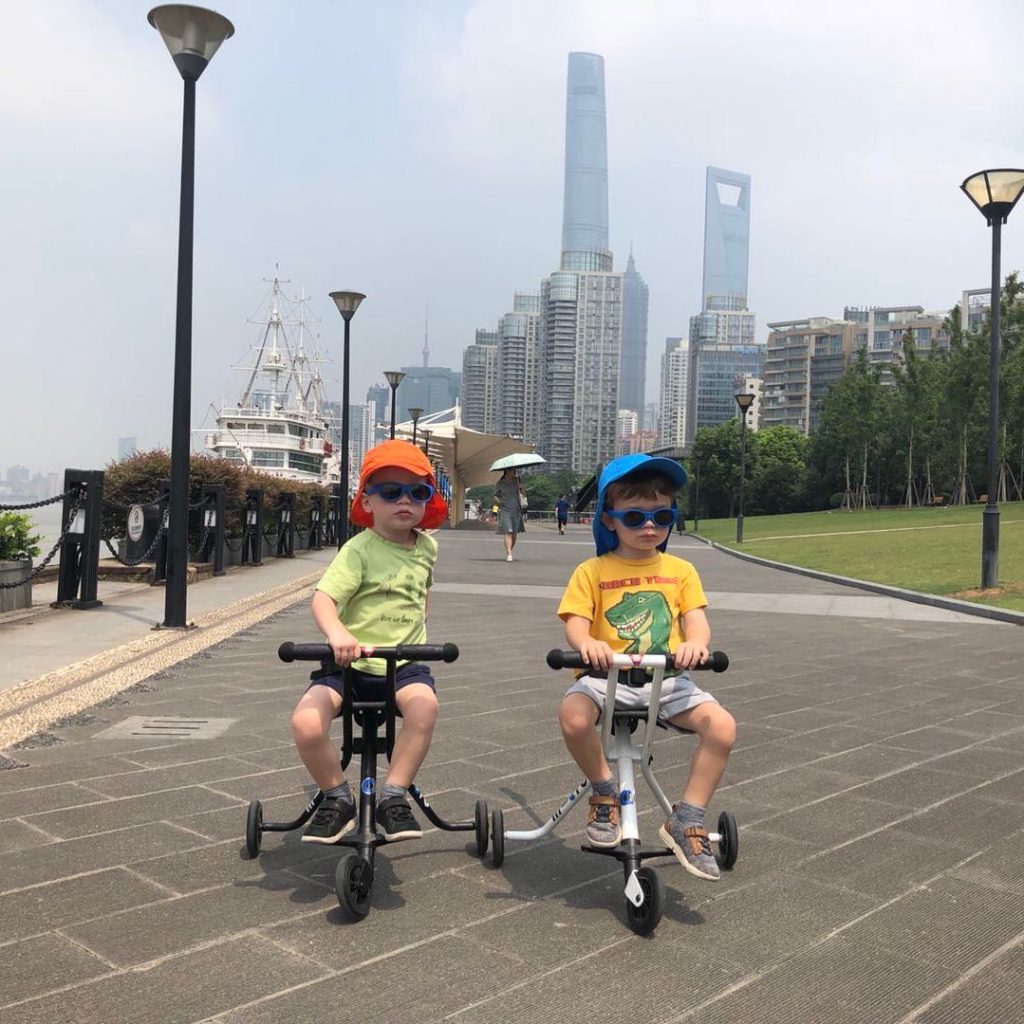 Despite being a little closer to home, London-based Rickard Barbet, who grew up in south Northamptonshire, took the opportunity to demonstrate his support of his home county’s hospice by choosing one of the country’s most iconic cycling routes for his 50 miles: “I’m lucky enough to live close to the 2012 Olympic road race circuit, so when they declared that the ride wasn’t happening as it normally would, I thought it would make a perfect alternative for my virtual C4C this year” explained Rickard.

“Sadly, there weren’t hundreds of spectators on the roadside at Box Hill to cheer me on as there would have been for the Olympians, but I felt just as proud to pedal, knowing that I was doing my bit for such a deserving charity” he enthused.

Meanwhile Michael Leszczyszyn from Northampton was one of hundreds of more local riders to take to the county’s roads for his seventh consecutive Cycle4Cynthia, electing to follow the 50-mile route designated by the event organisers earlier in the year.

“I’ve lost both my parents to cancer, not to mention a number of friends and colleagues, so even though I knew it wouldn’t be quite the same this time, pedalling alone, I was determined to keep up my annual challenge and help raise a bit more money” revealed Michael.

“The only thing is, I hadn’t done as many hours in the saddle in preparation this year, so my legs were a bit sore the next day but that was a small price to pay and I’ll make sure that, when we can all get back together for next year’s ride, I’ll be fighting fit again!” he grinned.

Those optimistic sentiments were echoed by Hospice fundraising manager, John Helm, who says that he and his team are already planning for something special in 2021: “Next year marks not only C4C’s eighteenth birthday but also the Hospice’s 45th, so we’re already thinking about ways in which we can celebrate those remarkable milestones and make the year one to remember” said John.

“In the meantime, we’re incredibly grateful to all those who, despite missing out on what we know would have been a wonderfully atmospheric day at Lamport, showed their much-needed support by doing their own ride and, with a few days left in the month, we hope others may yet get out on their bikes for us!” he added.

Cycle4Cynthia, which was again sponsored by leading commercial law firm EMW, has swelled the Hospice’s coffers by more than £600k over the last 16 years, and more recently has also helped to fund its Wellbeing service, which aims to help those with a life-limiting illness to live their life as fully as they can by helping to maintain their physical function and independence for as long as possible.

It has previously been the biggest fundraiser in the calendar for Cynthia Spencer and while it will be some time before it is known exactly how much this year’s event has raised, riders are kindly encouraged to collect their sponsorship money and post a cheque, made payable to ‘Cycle4Cynthia’, to Cynthia Spencer Hospice, Pondwood House, Pondwood Close, Northampton NN3 6RT.

Participants are also encouraged to post photos of their wearing their C4C medal, generously sponsored by letting and sales agent, Chelton Brown, on the ride’s social media platforms – @cycle4cynthia – in the hope of creating a celebratory online gallery.

To register for the ride before the end of September, please visit www.cycle4cynthia.co.uk

Meanwhile, for further information, including details of the various ways in which you can support the Hospice, or to pledge your donation in support of this year’s riders, please call the fundraising team on 01604 973340 or email fundraising@cynthiaspencer.co.uk