Starship Technologies, the world’s leading provider of autonomous delivery services, has today announced the launch of its service in Northampton in partnership with Co-op, with up to 5,000 households in the town, including Wootton and Hardingstone now able to access grocery delivery via a fleet of Starship robots.

With today’s announcement, Northampton is now the second UK town to benefit from Starship’s delivery service, following the company’s launch in Milton Keynes in April 2018. Starship’s robots have since completed over 500,000 commercial autonomous deliveries – more than any other company in the world. Starship operates seven days per week in local neighbourhoods and university campuses across five countries, and the robots have travelled over one million autonomous miles.

Co-op became the first convenience retailer to use same-day robot deliveries in the UK when it teamed-up with Starship Technologies in early 2018 to offer emission free online home delivery services in Milton Keynes and surrounding areas including Newport Pagnell and Bletchley.

Demand for Starship’s service has continued to soar during the COVID-19 pandemic, with delivery numbers across all restaurant and grocery partners tripling in Milton Keynes alone in recent months. The robots provide contactless deliveries, which allow people, including the elderly and more vulnerable that may be spending more time at home, to get their groceries delivered straight to their door. However wider community benefits of robot delivery were first seen pre-pandemic, when a note to say “thank you” was sent by a customer recovering from major surgery who  saw the service as a lifeline.

Andrew Curtis, Head of UK Operations at Starship Technologies, said: “We are thrilled to expand our service in the UK and bring robot delivery to neighbourhoods across Northampton from today. We have been humbled by the fantastic reception to our robots from local communities in Milton Keynes over the last two and a half years. This is the next step in our growth ambitions as we look to further roll out our service across the UK in the near future following increasing demand during the pandemic.”

Co-op is now on track to offer online on-demand convenience, through its own online shop – coop.co.uk/shop – and with partners, from more than 1,000 of its stores by the end of this year (2020). Deliveries are made in as little as under one hour, and up to seven days in advance. The retailer’s approach sees its stores act as micro distribution hubs locally, with orders picked from local Co-op stores – so its high street stores benefit from any increase in online demand.

Co-op has ambitions to use as many as 300 Starship robots by the end of 2021 as it looks for more towns and cities to operate autonomous deliveries after launching in Milton Keynes then Northampton. 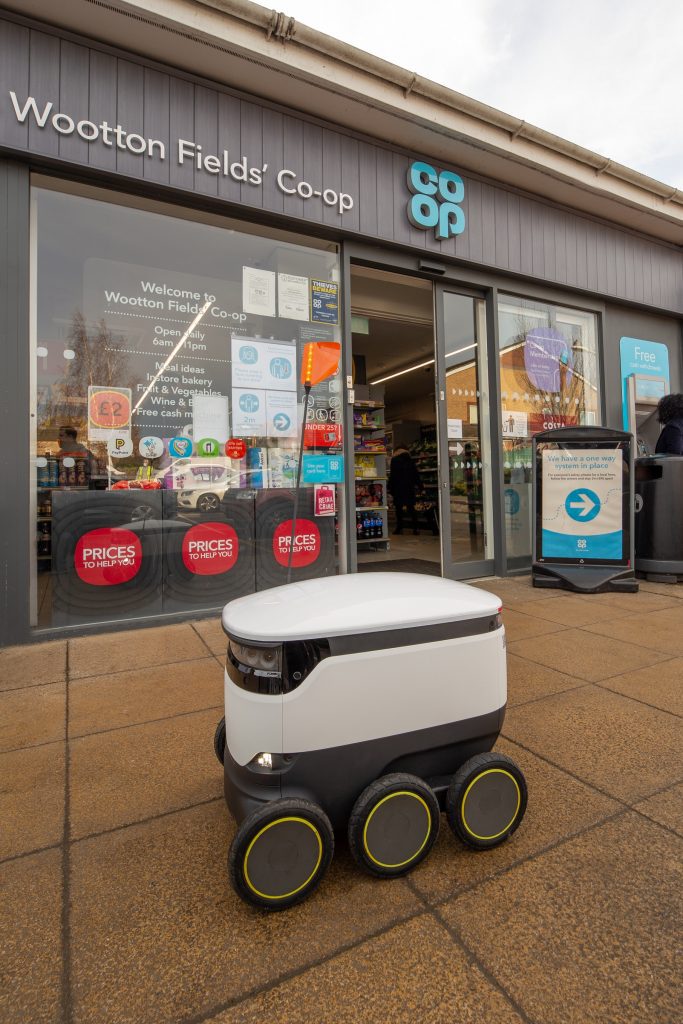 Chris Conway, Head of eCommerce at the Co-op, said: “We continue to look for new ways to innovate and expand access to our products and services to deliver a truly compelling offer for consumers. Our partnership with Starship enables Co-op to offer further availability, flexibility and choice to meet community shopping needs for on-demand convenience. We have seen big changes in eCommerce this year with new customers using the channel that have never used it before, and seeing the benefits. Offering quality and value quickly, easily and conveniently is core to Co-op’s approach – delivering what our Members and customers want, when and where they need it.”

Cllr Jason Smithers, county council cabinet member for Highways and Place at Northampton City Council, commented: “We have heard extremely positive feedback about how well loved Starship’s robots are and the benefits they have brought to local neighbourhoods, especially this year with the pandemic. We’re happy that residents in Northampton now have access to this world leading on-demand delivery service and we’re excited about further expansion.”

Northampton residents can access Starship’s service via the Starship Food Delivery app (iOS and Android). To get started, users simply choose from a range of their favourite food or drink items at Co-op, then drop a pin where they want their delivery to be sent. They can watch in real-time as the robot makes its journey to them via an interactive map. Once the robot arrives, they receive an alert and can then meet and unlock it through the app.

The robots use a combination of sensors, artificial intelligence and machine learning to travel on pavements and navigate around any obstacles. Computer vision-based navigation helps the robots to map their environment to the nearest inch, and as they are battery powered they help reduce both pollution and congestion levels.

The most popular items delivered by robot include: