Collaboration is at the heart of Nene Education Trust’s vision to deliver an inspiring, all-round education to children in East Northamptonshire.

Working together, the seven inspiring academies have created a vision to not only deliver excellence in education, but also to give each child the opportunity to develop confidence and self-esteem as they embark upon their career pathway.

But sometimes, even within a team, it’s important to stop and celebrate the individuals that have proven themselves invaluable to the overall success of the organisation.

At the Nene Education Trust Awards, staged digitally this year in line with the ongoing restrictions, the seven academies within the trust – Manor School, Newton Road School, Raunds Park Infants School, Stanwick Primary School, St Peter’s CE Academy, Windmill Primary and Woodford Church of England Primary School – came together to celebrate their achievements in continuing to deliver excellence in a year that has brought immense challenges.

The online awards night was hosted by Matthew Burton, headteacher at Thornhill Community Academy in West Yorkshire, the school featured in the TV series Educating Yorkshire, who said: “It’s important to take a moment and pause in what has been quite a surreal time to celebrate the role schools have played in their communities.”

Rosie Fry, who is in just her second year in teaching, was named Newcomer of the Year. She hadn’t been teaching at Raunds Park Infants School for long when her first year was disrupted by the pandemic. 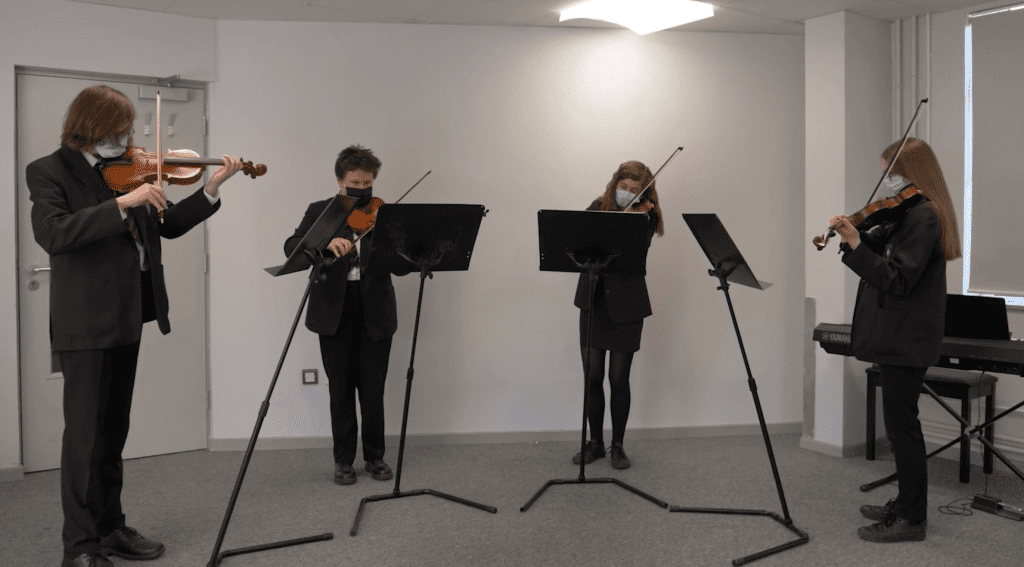 “It’s been a crazy time. I went into the job thinking about how I would get to know my class and then before too long everything was up in the air and we had to cope with lockdown and the school opening and closing. The staff have helped me all the way through, though, and I’m so lucky to have had their support as well as a wonderful class of children.”

Nicola said: “It’s great to win the award but you don’t think about it, you just get on and take what comes as part of the job, although the extra mile has definitely been needed this past year.”

Rachel Maxwell from Raunds Park Infants School took the Excellence in Creative Arts or Culture trophy. She said: “I feel very proud to win the award. I feel that engaging children’s creativity contributes to their love of learning and their motivation to keep trying. When we demonstrate an art or craft activity, the children are inspired by what they see and what to be do it themselves.”

For many children, and some staff, the pandemic has brought mental health and wellbeing issues and the Mental Health and Wellbeing Champion Award recognised the contribution of those who offer support in schools.

The winner, Alina Lumperdean from Windmill Primary, said: “Mental health has been a massive issue and it’s crucial just to be there for children and help them get back their love of learning and their love of school. The most important aspect is just being there, caring and listening to them and accepting them for what they are.”

Steph Awbrey from Stanwick Primary School received the Excellence in Special Educational Needs award, saying: “We were there throughout this challenging year to support children and their families because in school, or not in school, those children still need to have their needs met. Everyone at Stanwick Primary pulled together to look out for all the children, and I couldn’t do my job without their support.”

Katie Dicker from Manor School was named Secondary School Teacher of the Year. She said: “I am very pleased and grateful to accept the award. It came as quite a surprise, and I am touched to have been nominated by my colleagues; it’s a lovely feeling to feel appreciated by other teaching professionals. I am lucky to be part of a wonderful team at Manor and look forward to seeing some of my colleagues recognised in this way in the future.

Matt Coleman, Director of Primary Education at Nene Education Trust, was presented with the Outstanding Contribution Award in recognition of his work with #TechTogether, an appeal launched in January in conjunction with All Things Business, to encourage businesses to donate unwanted devices that could be passed on to children that were home schooling without a tablet or laptop.

Matt said: “What we have proved this year is that there is so much more to schools than academic education. We have come together to support each other and been Stronger Together. And the response from businesses was amazing.” 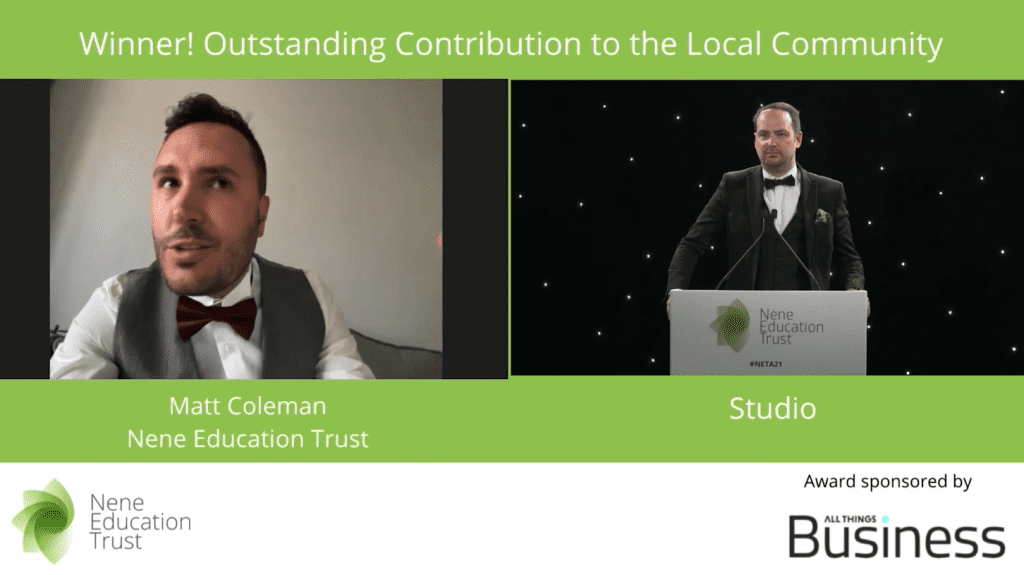 The Unsung Hero Award was presented to Jane O’Brien from Manor School. She said: “I currently run the Learning Resource Centre at Manor and have also been enjoying, working with the Sixth Form to support their pastoral and academic development. I am absolutely delighted to win the award of Unsung Hero – and how fitting that my award is in the form of a book.”

Chloe Neild from Stanwick Primary School was named Education Leader of the Year. She said: “I’m very proud of the staff and the family we have at the school. People really like being in the school, they like working together and working with the amazing families who come in each day.”

A Lifetime Achievement Award was presented to Dudley Hughes, who began his teacher training in 1967 at St John’s College in York and after retirement from a lifetime in education, became a governor of Manor School and then Chairman of the Board of Governors.

Dudley said: “I was honoured and touched to receive the Lifetime Achievement Award. I have been a teacher for 35 years in Rhodesia (now Zimbabwe), Ethiopia, USA and the UK; I have to say that I look back with pleasure and pride that I spent my professional life working with and for young people.

“I joined Manor School as a Governor and became Chair, saw it through becoming an Academy, Chaired the Manor Learning Trust and currently the Nene Education Trust. I see being a governor and a trustee as an important role in that it facilitates and makes it easier for staff working with  the young people.

“As I come to the end of my term as Chair I send my best wishes to the staff who have one of the best jobs in the world. In America I shared a desk with Christa McAuliffe, the teacher killed in the Space Shuttle Challenger disaster, whose motto was: ‘I touch the future, I teach’.

At the end of the awards, an unexpected surprise awaited Nene Education Trust CEO, Chris Hill. He was presented with a Most Influential CEO award from CEO Monthly, a magazine that offers insight, interviews and profiles of CEOs across the business spectrum.

The award is judged on a number of key criteria, including the individual’s and their organisation’s accolades and achievements, quality of service, commitment to development and expansion, physical and digital presence, and the role the company or organisation plays in the community.

Bringing the awards evening to a close, Chris Hill said: “What this year has demonstrated is how we can overcome anything that comes our way and I just want to thank everyone in every school for their hard work. My job is not about  me, it’s about the impact we can have on children and the communities we serve.” 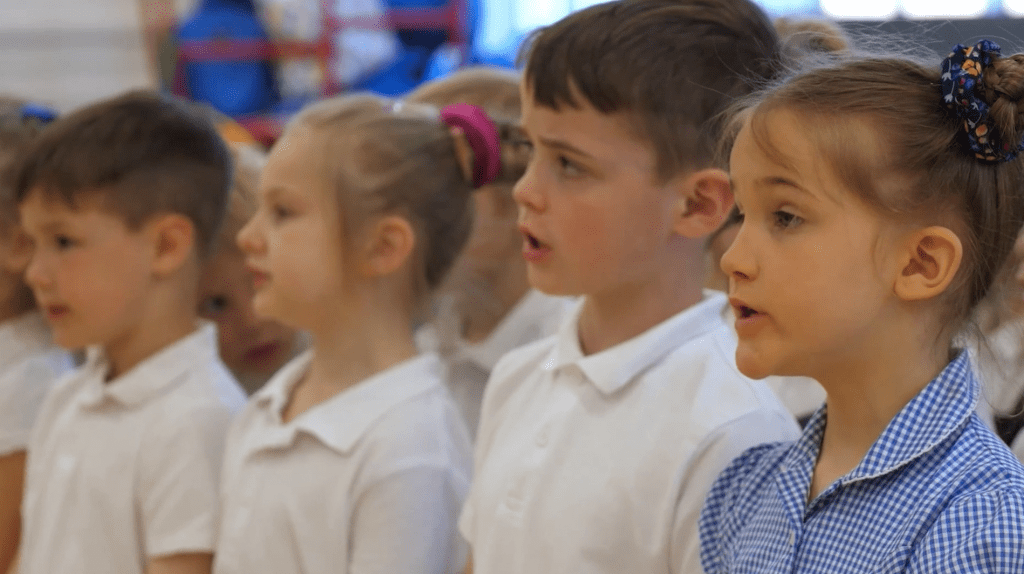 Newcomer of the Year (sponsored by Wilson Browne Solicitors)

Excellence in Creative Arts or Culture (sponsored by All Things Management)

Outstanding Contribution to the Local Community (sponsored by All Things Business)

Primary Teacher of the Year (sponsored by EXA)

Secondary Teacher of the Year (sponsored by EasiPC)

Teaching Assistant of the Year (sponsored by NSBA)

Education Leader of the Year (sponsored by J Sweeney Accountants)