Positional play is everything in sport – the right person in the right place at the right time is invaluable and everyone wins.

A similar approach has been taken by Lewi Williams of Hendrix Barber Co, who has recently opened his third barbershop, at St James End in Northampton, close to some of his most regular clients – footballers and rugby players from the town’s two league clubs.

It’s the third new business in two years for Lewi, who also owns barbershops in Wellingborough, run by manager Sam, and Earls Barton overseen by Dil.

The relationships with Cobblers and Saints players started when Lewi was working at a barbers in Northampton and many of them followed him when he moved out of town to set up his own business.

“It started with me doing haircuts for a handful of players, then they would tell their teammates and it went on from there,” said Lewi. “Even when I moved out to my own barbershops, they would travel to Wellingborough or Earls Barton to get their hair cut, so it made sense that the next step would be to open in Northampton, and I chose a location where it was easy for the players to get to.

“And, of course, it gives me a chance to expand the business into Northampton, on the back of how busy we’ve become in the other two sites. It’s not just about the sporting side of it, we’ve got a great customer base and I’m proud to be opening my third barbershop within two years.”

It’s all testament to the efforts Lewi has put in to making the business a success after a difficult start. His first attempt at setting up on his own didn’t work out well but he set about learning the ropes of running a business and, when the time was right and with the backing of a silent partner, he tried again and things went from strength to strength.

“I didn’t get off to the best start from a business point of view,” said Lewi. “But now, having learned a lot about business, I am in full control. I set up Hendrix Barber Co in Wellingborough two years ago and it was so successful that six months later my previous place, No 11 in Earls Barton, came onto the market and so I bought it.” 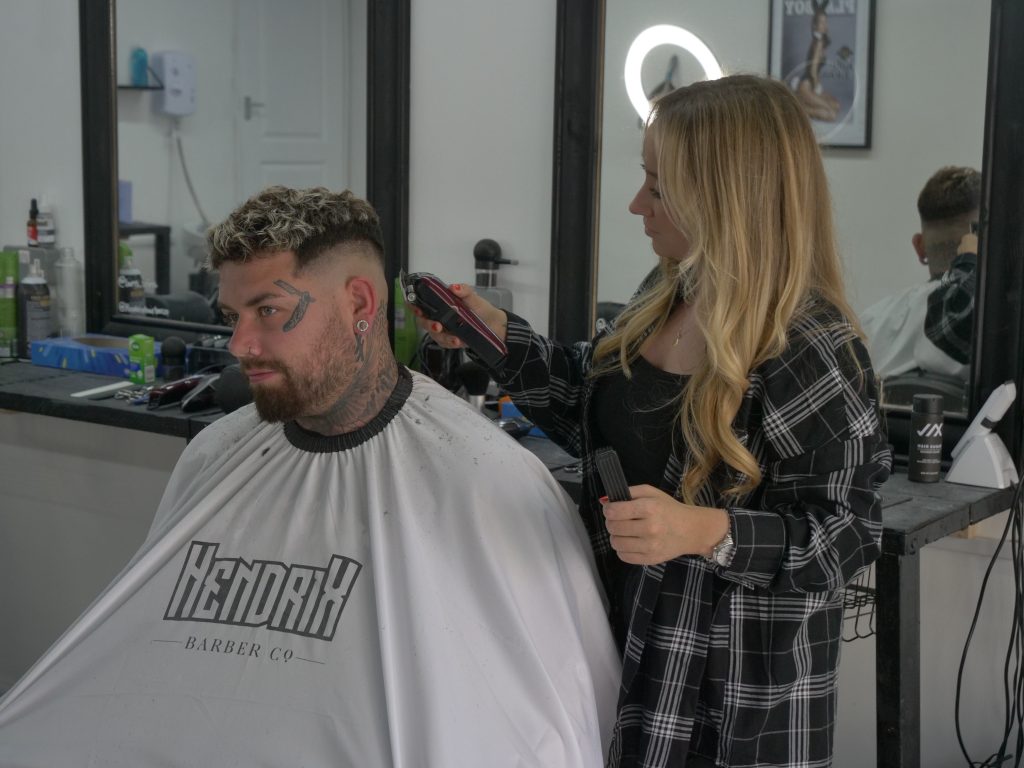 Hendrix is named after Lewi’s four-year-old son, while Lewi’s new hair styling product range is named after the newest member of the family, eight-month-old baby Jax. The opening of the new Northampton barbershop comes at the end of a year that has seen Lewi juggling the demands of two young sons with the effects of the pandemic and the after-effects of a serious road accident last October that left Lewi in a coma for five days.

“It’s been an interesting year to say the least, but in a way it’s actually made me step back and slow down a bit,”

“I’ve got a great manager, Emily, in Northampton. She’s one of the most talented female barbers I’ve ever known and having her there, with her team of Gio and Sam, means that I can relax a bit and know everything is going to be fine even when I’m not there.

“Since the start, I have surrounded myself with staff that are more than employees, they’re my friends and I trust them and they are like my extended family.”

While building the business is important to Lewi he still has some ambitions in terms of his dream clients. It’s true that one of his clients, he won’t say who, was at the Euros this summer, but he has his sights set on his beloved Tottenham Hotspur.

“I’m a massive Spurs fan and I would love to cut the hair of some of the players, I’d play it cool, of course, I wouldn’t tell them I was a fan until maybe the third haircut or something like that!”

To find out more or book a cut visit www.hendrixbarberco.co.uk