A UK Armed Forces veteran who works as a regional manager at Amazon is encouraging fellow ex-services personnel to apply for the wide range of recruitment opportunities currently available through the Amazon Military Programme.

The Amazon Military Programme, which launched in the UK in 2011, offers veterans the opportunity to pursue exciting post-military careers. The programme saw Amazon named Employer of the Year at the Ex-Forces in Business Awards this summer. Amazon also won the award in 2020.

Ed Dutton (40) is one of the hundreds of former servicemen and women currently working in roles at Amazon buildings around the UK.

Ed and his fellow veterans apply their transferable skills, knowledge and leadership abilities gained in the military to a wide variety of careers across the UK.

He is now encouraging fellow veterans to attend Amazon Military Programme events that take place throughout the UK.

Ed would also encourage the military community to subscribe to the military talent pool.  Individuals can upload their CV into the talent pool from where recruiters actively source candidates. https://amazon-emea-military.splashthat.com/

Speaking on his post-military career at Amazon, Ed said:

“I went to university in Birmingham and joined Devon and Cornwall Police when I graduated back in 2005, staying with the Police until 2015. In 2006, I joined the Army reserves and in 2009, I was posted in Afghanistan.

“I decided to pursue a different career and joined Amazon as an Area Manager, initially working at the fulfilment centre in Hemel Hempstead. A year later, I moved to an Operations Manager role at Amazon’s fulfilment centre in Coalville, which at the time was a brand new site.”

“In 2018, I took military leave from Amazon went back to working full time with the Army, commanding a squadron of engineers for two years. In 2020, part of my final role with the Army reserves was to assist with the distribution of PPE during the early part of the pandemic, before I re-joined Amazon. Amazon has been really supportive as an employer of a reservist – I don’t know many companies who would have supported me in this way. Today, I work across several of the company’s buildings in Bristol, Milton Keynes, Hemel Hempstead, Dunstable, Tilbury and Dartford.

“The question I’m asked quite often is what inspired me to move to Amazon from the military. When I was thinking about a new career, I met an old friend who I was with in the Army reserves, and he had moved to Amazon. He advised me to apply for a role and I took his advice. Also, the two organisations are quite similar. My role in the Army was heavily focused on operations, much like Amazon, and leadership in both organisations is fundamental to their success.

“The best thing about working at Amazon is the people. It’s a real melting pot of personalities and cultures, which makes our team engaging and fun to be part of. If you’re in the forces or you’ve recently left and you’re thinking about your next career move, then I’d highly recommend applying for a role with Amazon. The skills learned in the military are transferable to roles with the company, including leadership, planning and problem-solving skills. It’s a really good fit for people coming out of the military and a great environment to learn new skills.” 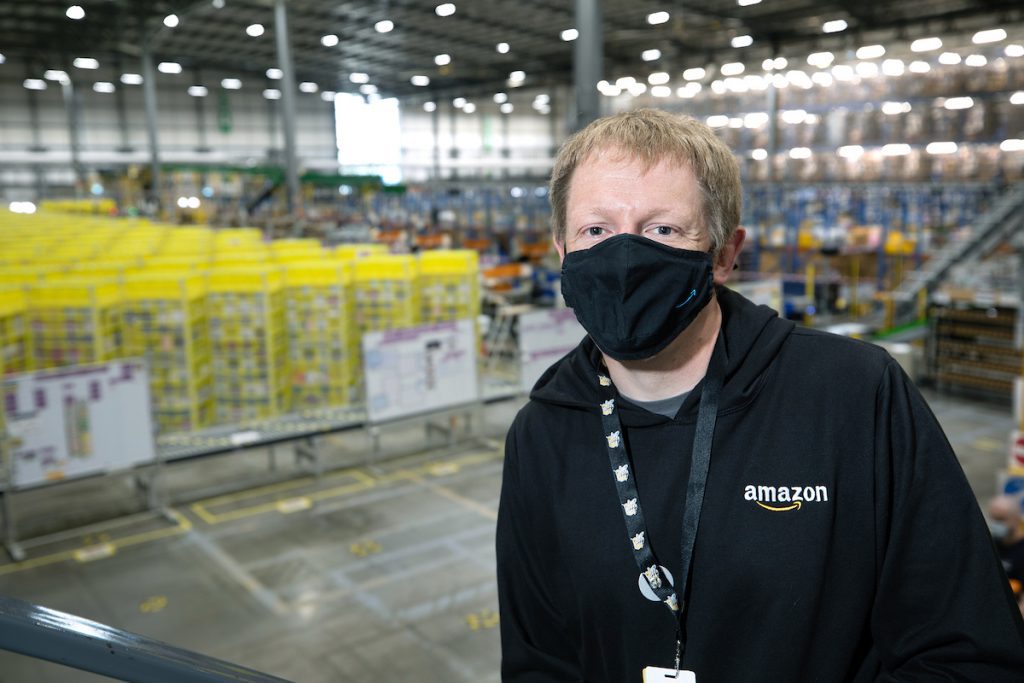 “Amazon is committed to supporting the men and women who have served their country in the Armed Forces and we’re exceptionally proud to have Ed on our team at Amazon. We’re passionate about offering an exciting range of roles for people looking for a career after leaving the military. I’d encourage anyone who has recently left the Armed Forces to attend some of our Amazon Military Programme events to see the breadth of opportunities available to them with us.”

Employer of the Year at the Ex-Forces in Business Awards

Amazon was recently awarded the Employer of the Year Award for the second year running for their outstanding efforts in supporting ex-services personnel and military spouses. The ‘Military Pathways’ programme stood out as impressive in committing to supporting and developing ex-forces leadership talents across the organisation.

The Ex-Forces in Business Awards is the world’s largest celebration of military veterans in second careers. The awards are dedicated to providing a much-needed platform for uncovering and showcasing the business achievements of ex-military, presenting them as role models to service leavers, and recognising the employers that support current and former members of the British Armed Forces.

One of the opportunities available to the ex-forces community is the Amazon UK Consumer Military Internship, which launched this year for the first time.

It offers a path directly into corporate roles in e-commerce for those transitioning from the Armed Forces. Those on the programme are supported throughout their transition to the corporate world, including a military mentor who already works at Amazon, tailored support from line management and an on boarding buddy.

Earlier this year, Amazon announced plans to create more than 10,000 new permanent jobs in 2021, taking its total UK workforce to more than 55,000 people by the end of the year. It is also investing £10 million over three years to train up to 5,000 employees in new skills and support the Government’s investment programme. This training will be offered through Amazon’s Career Choice programme, where the company pays course fees for its employees who have expressed an interest in pursuing a career outside of the company – something that will boost the skills and employability of British workers.

For existing Amazon employees who see their long-term future outside of Amazon, the Career Choice programme provides funding for adult education, offering to pre-pay 95% of tuition and associated fees for nationally recognised courses, up to £8,000 over four years. Courses available range from accountancy to HGV drivers and software developers, and are designed to help employees pursue careers outside of Amazon if they choose to do that.