The European road freight team at Europa Road at Midlands Logistics Park in Corby continues to recognise talent with the announcement of two major promotions.

Europa Road is part of Europa Worldwide Group and offers European road freight services for both import and export customers across Europe.

Based at a brand-new state-of-the-art warehouse facility at Midlands Logistics Park, Europa Worldwide Group’s Corby site employs over 300 and is one of 13 local branches situated across the UK.

It is an exciting period of growth for Europa Road which is currently on a major recruitment drive to increase its UK sales team by 60 per cent. The team at Corby is looking to expand its headcount from 12 to 15.

As part of investment into the team Mitch Clarke (previously Corby Branch Manager) has become Regional Manager (South) after being with the company for five years. Samantha Stockley has been promoted to Branch Manager for Corby after joining Europa in 2019.

“I’m thrilled to have been given this unique opportunity and head up our Corby branch, especially at such an exciting time for Europa Road as we continue to expand and grow. Europa truly encourages progression and it shows, it’s been a honour to be part of the team and I’m looking forward to taking on this new challenge and building our customer network.”

Having joined Europa as a Branch Manager, Mitch has moved through the ranks at the business and his new role sees him leading on support for four regional branches and a growing team of 64.

On starting his new role as Regional Manager, Mitch said:

“I feel very honoured to be taking on this new position and overseeing operations across the Southern region. It’s great to work for a company that has faith in your development and pushes you to be the best you can. I look forward to using the experience I have gained within the Corby team to help build our relationships with customers in the South and continue to provide them withan excellent service.”

Europa Road has seen significant success following the introduction of its new unique solution, Europa Flow – which allows goods to move quickly and efficiently between the EU and UK with minimal delays. 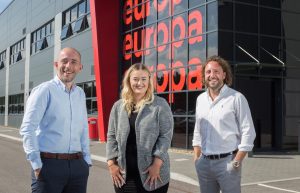 “At Europa we strive to recognise existing talent within the team and it’s always great to witness individuals grow. It’s a dynamic time for European road freight and we’re looking forward to continued growth and expansion for the business and across our teams.”

In June, the logistics provider finished building its 715,000 sq ft 3pl super facility on Plantation Lane in Corby. The new 25-acre site, which is shared by Europa Warehouse and Europa Road, is now looking for more recruits as it has invested a further £11m in adding the latest high tech Al automation to its warehouse.