You’ve got to fight for what you want – something Northampton boxer Conner Downs knows only too well as he bids to get his big break in the professional game.

Returning to boxing after a few years’ break, Conner, known to boxing fans as Ceno, still had all the skills to take him to the next level, but the road to professional success is tough and he’s currently relying on sponsorship and successful events to gain the foothold he needs to make a living from his sport.

In December, Ceno’s professional bout at the Morningside Arena in Leicester will also be shown on Fight Zone TV. Ticket sales will cover the costs, and additional revenue from a range of promotional caps provided by Wellingborough-based BMT Promotions will generate
some more.

With financial help from BMT Promotions and other sponsors, Ceno trains during the week at his Fight Camp in North Finchley, working on his physique and fitness and learning some of the more technical aspects of the sport.

“I fight at featherweight but when I train I try to spar with guys who are at least welterweight because it’s better for my strength and fitness,” 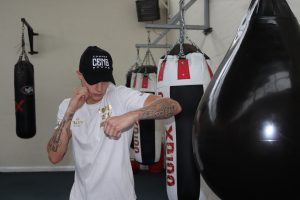 “I was a late developer and I’m just starting to really see my body develop and I’m working hard in the gym. I want to move up a weight eventually but for now my fighting weight is featherweight.

“Where I’ve made the biggest difference is in the way I fight. I am a tough opponent but I just used to go in the ring and hurt people, if that doesn’t sound too brutal.  Now I’m learning a bit more about how to box, the tactics and technique, so I’m an all-round better fighter.”

Tickets for the Morningside Arena event on Sunday, December 12 are available through Ceno, and on the night his supporters will be able to show their allegiance by proudly wearing the boxer’s name.

“I need to get noticed in the fight scene, I’m fighting well and winning, and I just need to raise my profile and get my name noticed. By holding the event in December, I’ll hopefully make an impression, and promoters will see I’ve got a good fan following and I can fight, and give me a chance.

“Jack Thomas from BMT Promotions has helped me with sponsorship so I can afford to spend the week working in the gym in London. We are also working together to create a merchandise range, starting with CENO baseball caps, and will look to expand this as my profile grows. This all helps to get my name out there.

“I had a decent career as an amateur boxer but I got a bit sick of what I saw as the politics of it all and so I decided to do other things. Unfortunately, I lost my way a little and got into a bit of trouble, so I realised I needed to get back into boxing and focus.

“Not long after I started training again, lockdown happened so that was my opportunity to go for it, get fit and launch my professional career.”

“Boxing is one of my favourite sports and I read about Ceno and how he was trying to get the break he needs. 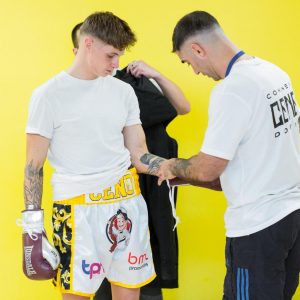 “It’s a tough world and boxers have to fund everything until they get picked up by a promoter, and so I decided I would sponsor him so that he could train full time. In addition, because my company specialises in promotional items for businesses and events, we’ve done the baseball caps and, as time goes on and his fan base grows, we’ll hope to add T-shirts, sweatshirts and the like.

“I’d love to see him do well, he’s got the talent, and when he does find a promoter and moves to the next level, I’d like to be able to follow him through this professional career. We’ve got a whole range of products we can offer, so if we’re able to, I’d love to be able to go on that journey with him, and with anyone else who thinks we can help build their profile.”