On Thursday March 24, businesses and organisations from across the Milton Keynes region will come together in person for the biggest celebration in over two years.

The Milton Keynes Business Achievement Awards 2022 (MKBAA) will take place at Stadium MK and celebrate the business community’s achievements over the past 24 months since the last MKBAA event in 2020. The theme of the awards this year focuses on the city’s ability to play a leading part in the UK’s Green Recovery post-pandemic, to help all sectors Survive, Revive & Thrive.

It promises to be a star-studded night with organisers announcing Wayne Hemingway MBE as the guest speaker for the prestigious event. Known as a prolific fashion designer and for his entrepreneurial endeavours, Wayne’s career in fashion began when he started to sell some of his and his girlfriend’s old wardrobes, which were full of handmade and vintage clothing, at a market and they went down well. With his future wife, Wayne built Red or Dead into a worldwide label and, after 21 seasons on the catwalk, it was sold in a multi-million-pound deal.

They went on to found HemingwayDesign with a mantra of ‘Design is about improving things that matter in life’ and over the past two decades it has delivered many high-profile and award-winning affordable new-build housing schemes, turned around troubled estates and undertaken a string of impactful seaside regeneration projects.

“Wayne is a sought-after speaker, covering a range of topics from brand loyalty to social responsibility, urban design and his long-term passion of sustainability. This fits well with the MKBAA theme this year, looking at the role Milton Keynes businesses can play in the green recovery.” 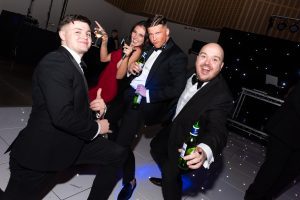 Acclaimed broadcaster Tony Dibbin will be the compere at the glittering event. As a recognisable voice from the UK’s airwaves, he can be heard daily on Bauer Media’s Absolute Radio 70s, Nation Radio UK and at the weekend on Greatest Hits Radio. In January 2022, Tony launched a radio station of his own, with Arena Radio broadcasting as the world’s first all-live music radio station.

Nicholas Mann went on to say:

“We’re really pleased to announce Tony as our compere this year, his inimitable style will help the evening flow and he’ll also get the very best out of our guests and winners on stage.”

The event will also see the Lord-Lieutenant of Buckinghamshire, Countess Howe, welcomed to the stage, to speak about the work she’s been involved in as part of the Queen’s Green Canopy Project in this Platinum Jubilee year. She will be joined at the event by the High Sheriff of Buckinghamshire, the Mayor and Deputy Mayor of Milton Keynes and the Leader of Milton Keynes Council.

Above all, the awards will see the business community come together to celebrate and recognise achievements across 13 categories and will also see the prestigious Business of the Year award presented, as well as the coveted Lifetime Achievement Award. This award has previously been won by a number of inspirational leaders who have demonstrated a sustained active and deep involvement in the communities of Milton Keynes over a number of years, including Dr Ann Limb, CBE; Milton Keynes Dons Chair, Pete Winkelman; and Dame Cleo Laine.

For the first time in the history of the awards, ticket sales had to be put on hold for a short time, in order to allow for finalists to secure a place at MKBAA 2022. This just goes to show the appetite within the business community for live, in-person events like this to restart after the pandemic and the need for the community to celebrate its achievements.

“The support shown for the awards in 2022 has been staggering. To have to put ticket sales on hold is unprecedented. We are extremely grateful to our sponsors for the commitment they have shown this year, but also to the Milton Keynes business community as a whole, who have once again stepped up to the plate and shown their desire to applaud their peers and celebrate what MK has to offer.”

The awards are gratefully sponsored by a number of organisations, including headline sponsors Milton Keynes Council, Shoosmiths, The Open University and MK Gateway.