After a rather mixed recent history, the future of The Falcon at Castle Ashby is looking healthy again – literally.

The running of the historic coaching inn that is, like the other properties in the village, part of the Castle Ashby estate, was taken over by Lord and Lady Northampton in 2015. After leaving the early development stages in the hands of a business associate to begin with, the couple decided to take a different route after Lord Northampton developed cancer. His recovery was attributed to his firm belief in finding alternatives to traditional medical practices and, with Lady Northampton still practicing as a psychotherapist at her clinics in London, an approach to hospitality that reflects the couple’s beliefs, and is based in nature and healing, was adopted.

The interior of The Falcon is decorated in colours that reflect the unspoilt beauty of the estate outside the window, and the kitchen team, headed up by Russell Bateman, believes in good, organic food delivered in simple but delicious ways, working with local suppliers and gamekeepers to source the best available produce.

Russell, who worked in three of Gordon Ramsay’s Petrus restaurants before shifting his focus to Northamptonshire, approached Lord and Lady Northampton to enquire about a position at the restaurant, Eyas – which means a young falcon – because he believed it was aligned with his own values. Similarly, the rest of the team were keen to join him in Northamptonshire, partly to work with a renowned chef and partly due to his penchant for running a kitchen where the emphasis is on kindness and calm, often to a background of Russell’s favourite Stone Roses tunes. 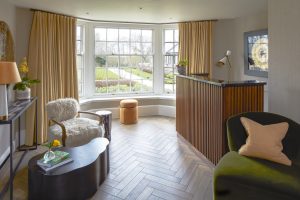 The £75 tasting menu changes regularly but will include the likes of diver-caught Orkney scallops and spring truffles. Similarly, the lunch menu changes to reflect the seasons and availability of excellent ingredients, but includes a choice of three starters, three mains and a selection of desserts, for £35 per person. Eyas is open daily for breakfast from 7am to 10am (10.30am at weekend) and from Wednesday to Saturday for lunch and dinner, and for Sunday lunch between 1pm and 5pm.

The East Wing Lounge bar is open daily from midday, afternoon tea is served Friday to Sunday 3pm to 5pm, Steak and Wine night is Wednesday from 7pm to 9.30pm, and Fish and Chips night is Friday, from 5pm to 7pm.

Lord Northampton said: “When I’d recovered from cancer I had developed an interest in anything that prolongs a healthy life. My wife is a psychotherapist and understands the need for letting nature heal the body and so we took what we thought was a far more interesting route for the hotel.

“We don’t offer treatments as such, although we have wonderful nature trails and the open water swimming in our lake has become incredibly popular.

“While we began with ideas for a very grand fine dining menu, we reassessed that and moved to a tasting menu in the evening alongside a vegetarian menu option. That means less waste, because the chefs always know what they are cooking and for how many.”

Extensive building work has added 22 individually decorated bedrooms to the 16th Century inn, adding another dimension to The Falcon and allowing guests the chance to spend more time in the area. For hotel residents, a number of walking routes around the estate have been clearly waymarked, and exploring the ponds in Sane Copse – home to many of the rarest species in the country, mainly because it sat virtually undisturbed through many years of use by the Ministry of Defence which restricted public access – is a fascinating experience.

Three cottages on the estate are to be turned into accommodation for retreats, and an old cow shed is being renovated to provide a village wellness centre including yoga studios and a vegan café. 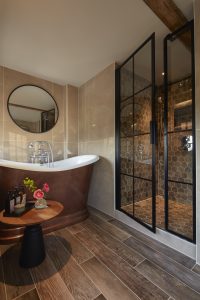 Lady Northampton, who runs a clinic in London and is a Governor of St Andrew’s Hospital in Northampton, said: “We both really feel that there is an energy at Castle Ashby that can help people get back to nature. I don’t offer treatments here, but a lot of my patients have visited to enjoy the peace and quiet as part of their recovery.

“In June we have an event that focuses on eating disorders and the importance of nature and diet in treating them. We would like to do more of that kind of thing. Because of the surroundings and because we have Russell and his team, who are very passionate about good food and healthy eating, we can easily cater for that and for guests in the cottages once they are up and running.

“We also want to encourage business clients to come along for teambuilding days or just for some rest and relaxation.”

Part of the original vision was to bring the community together and Lord and Lady Northampton are hopeful that by providing new amenities and encouraging visitors to the village, the benefits will be felt by all. 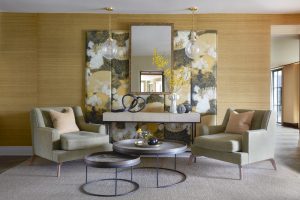 Lord Northampton explained: “The idea of the feudal lord at the top and everything filtering down from him is long gone. I wanted to turn that on its head and put the focus on the community and how they use the estate and have them become more involved.

“It’s early days, The Falcon had to close due to the coronavirus situation not long after it had opened, and we’re just getting back to normal now. We have a clear vision of what we want The Falcon to become. The restaurant is called Eyas, which is the name for a young falcon that is taken from the nest early to be trained, and that’s how we see ourselves. We’re trying new things and hopefully they will work, and one day we will fly!”

The Falcon at Castle Ashby can be contacted on 01604 698005, email reception@thefalcon-castleashby.com or visit their website.