An asbestos consultancy in Northamptonshire is backing a campaign to raise awareness of mesothelioma.

Every year, around 2,500 people in the UK are given the devastating diagnosis that they have the incurable cancer which is caused by exposure to asbestos.

Asbestos is a material that was used heavily in the building trade until 1999 and as a result it can still be found in many private and public buildings. Indeed, it is estimated that asbestos is present in 86% of UK schools and 94% of hospitals. 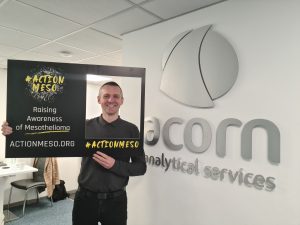 However, a group of campaigners, called #ActionMeso, are leading a fightback to raise awareness and eradicate asbestos and asbestos-related diseases. They are working on plans for major events, such as Action Mesothelioma Days starting with a virtual event this year, and in the meantime they are encouraging their supporters to use the campaign’s selfie boards to create memorable posts on social media using #ActionMeso.

Flying the flag for the campaign in Northampton-shire is county-based independent asbestos consultancy, Acorn Analytical Services. The firm works tirelessly to educate people about the dangers of asbestos through its regular podcasts, blogs and its free book, Asbestos – The Dark Arts.

Company director Ian Stone said: “We’ve been having lots of fun in the office creating pictures for our selfie board to promote #ActionMeso but there’s a serious message behind what we’re doing.

“There are thousands of deaths every year from mesothelioma and while this disease is tragically incurable it is also preventable.

“This campaign sees patient support groups, charities, professional bodies, patients, carers, healthcare experts and industry professionals coming together for the first time with one single voice to demand the eradication of this terrible disease.”

The latest figures from the Health & Safety Executive revealed there are still more than 5,000 asbestos-related deaths a year, including around 2,500 from mesothelioma.

The time between exposure to asbestos and the development of mesothelioma can range between 10 years and 70 years. As a result, it has affected people from as young as 14 to 90 and upwards.

Despite the ban on asbestos products in 1999, widespread use of such products in the past – particularly in the post-Second World War building industry – has led to a large increase in asbestos-related disease in Great Britain over the last few decades.

Fellow Acorn director Neil Munro added: “Although we haven’t used asbestos in new buildings since 1999 the material remains within the structure of older buildings up and down the length and breadth of the country. Experts believe as many as one and a half million UK properties still contain asbestos, including workplaces, schools, hospitals, other public buildings and homes. This is why we often refer to asbestos as the ‘hidden killer’.

“At Acorn, we work hard to educate people that if they own a building older than 20 years old they have a legal responsibility to ensure any asbestos is effectively monitored and managed to ensure the safety of anyone who may come into contact with it.

“Failure to effectively manage asbestos not only puts lives at risk it can lead to fines of hundreds of thousands of pounds and even prison terms.”

To help businesses to deal effectively with managing asbestos, Acorn has created a step-by-step service called the Acorn Asbestos Antidote which takes firms from non-compliance through to full compliance with the law and ensures any asbestos no longer poses a danger.