With six games played, six wins under their belts, 36 goals scored and only three conceded in all competitions this season, the Northampton Town FC Women’s First Team are flying high at the top of the East Midlands Regional Premier Division. Recent success that emphasises the hard work put into the Northampton Town’s Women’s & Girls programme over the last few years.

While the strength of the first team, managed by Lou Barry and Josh Oldfield, is evident through this season’s results and their exceptional league position, credit must be given to the overall programme which allows girls to filter through the ranks, striving for first team action.

In June 2020, the Northampton Town Women’s Development Team was created to improve the pathway between grassroots and the first team, bridging the existing gap. The introduction of this step is pivotal to the player pathway, providing opportunities for younger players to work toward the first team. Currently, the development side, managed by Alex De Boer, have mirrored the first team’s 100% record across three games, scoring 23 goals, and conceding only three, placing them at the top of the Northamptonshire Women & Girls Macron Football League.

The sheer success of the current system is exacerbated by the five girls (Eve Braddock, Macy Crick, Ella Hepworth, Remi Martin and Beth Artemiou) who have transitioned from the U16 side into the development team. They follow the many first team players on show in the spectacular 9-2 victory at Sixfields Stadium vs Rotherham United who have previously played in the development side.

The recent showcase fixture at Sixfields Stadium not only saw an 11-goal thriller but saw a club record attendance of 602 fans, the second highest attendance across games played below the FA Women’s Championship this season. The day was a remarkable success, epitomised by the U10 PDC team as mascots, as well as local teams, sponsors, partners and others in attendance. 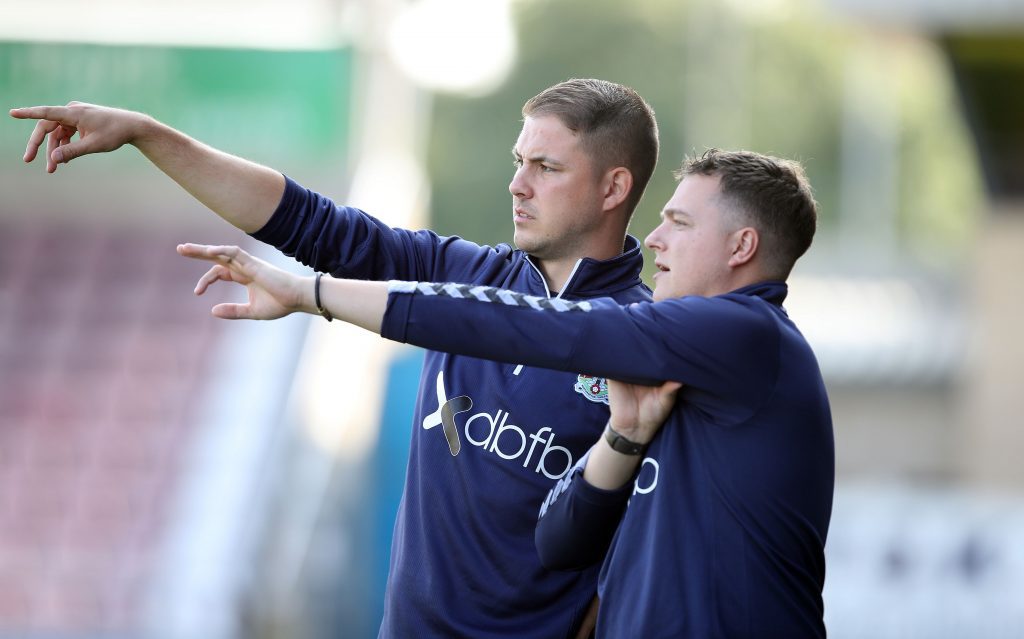 “Northampton Town’s female provision is currently on a massive upward trend – both on and off the pitch. Headlined by the success and rapid development of the Senior Women’s team in recent seasons, the programme is looking as strong as it ever has.

“Frustratingly, having been promoted in 2018, the following two seasons were curtailed due to COVID-19 but the level of professionalism, dedication and energy from players and staff is something which is deserving of a higher level of football.”

Presently, over 200 girls embark on the programmes with opportunities available from the age of five, offering girls with no football experience the chance to take part in engaging activities, and most importantly have fun through football. This allows girls to enrich their skills and progress through either the skills centres, grassroot teams or the elite player development centre (PDC). The club also runs a Football Education Programme (FEP), offering full-time education for 16 to 18-year-olds, combining a high-quality formal qualification with sport-specific work experience and football opportunities.

Previously, the step between U16 and adult football was too large for many. The introduction of the development team and FEP is pivotal to the player pathway, provides an opportunity for younger players to work toward the first team. 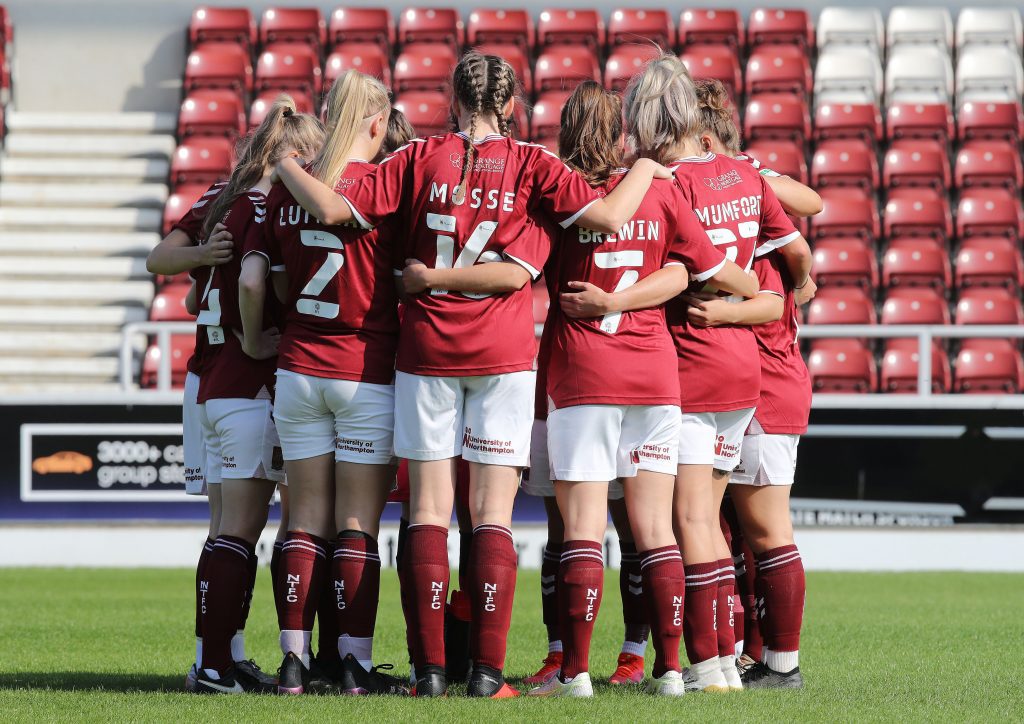 In March 2021, the Northampton Town FC Community Trust appointed Sophie Mullett as its Women’s & Girls Officer, with responsibility for leading the organisation and behind the scenes work of the whole programme.

“After a few turbulent seasons due to COVID-19, it has been incredible to see football restart again, the women hit the ground running, and get the credit they deserve. After not really getting the chance to fully demonstrate their quality in this league, they’re finally relishing the opportunity.

“Their results have been a true testament to not only all the girls’ hard work off and on the field, but the people in the background too. The coaches, sports psychologists, physios, right through to the media team – all lead to the results and forward progress made. These are all volunteers that give up their time to create this environment and it never goes unnoticed.

“The real highlight so far was seeing over 600 people at Sixfields to watch the women against Rotherham. That really showed just how far the game has grown and how much this side has moved forward in the last few years.

“Players like Beth Artimou, who have come through the system, really do show the benefit of the pathway created here and what we wish to see more of.”

Midfielder Beth has been involved in the Northampton Town Women’s & Girls Programme since she was seven years old. Since then, she has made her way through the Player Development Centre, including a brief stint at Arsenal Ladies, before returning to Northampton. In her last season with the PDC she was fast-tracked into training and playing for the development side. Currently, Beth is a member of the Football Education Programme.
This season, Beth’s game has really progressed turning her into a pivotal member of the development side, scoring twice, and assisting four goals in just three games, leading to her featuring in the First Team Squad. Beth’s story is a fantastic example of how joining the Women & Girls Programme at Northampton Town can positively impact girls aspiring to be the stars of the future. 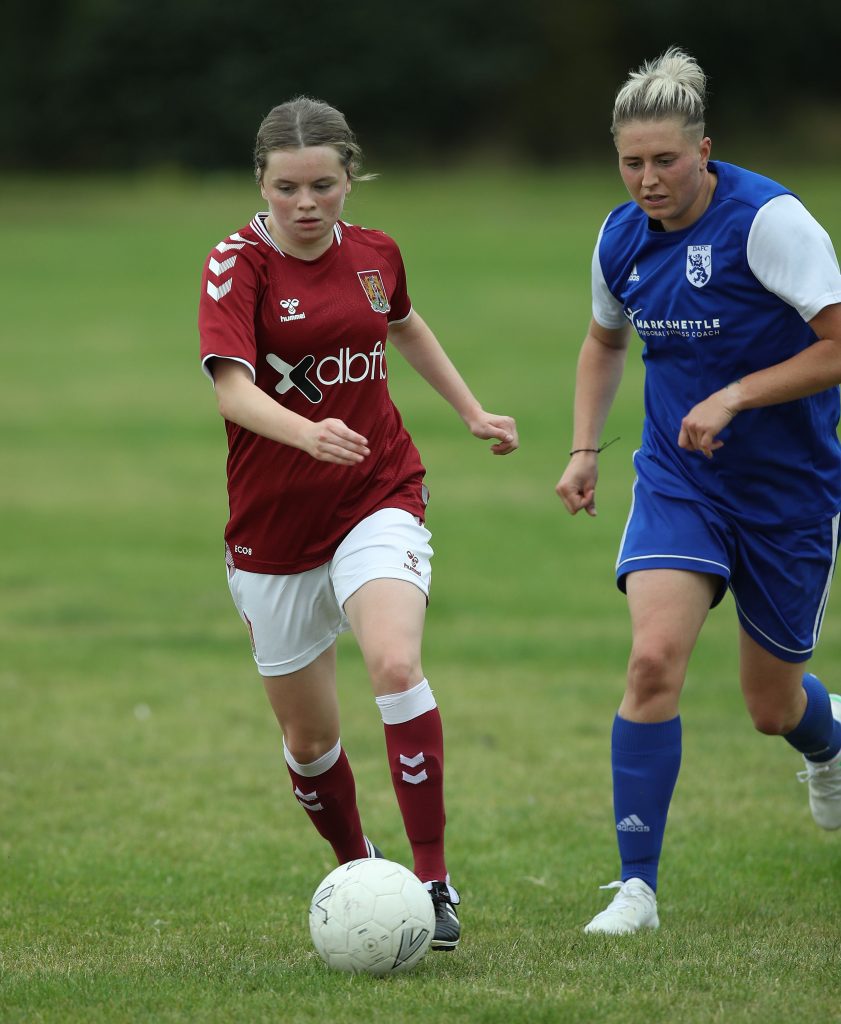 Despite the unique appeal of the football club, none of the work is possible without the support of sponsors. For several years, dbfb, the University of Northampton and Grange Mortgages have sponsored the Women & Girls set up, helping to fund the programme. The club is also thankful to the group of individual player sponsors who partner with members of the first and development teams.  There are also opportunities to support the women’s pathway from the bottom to the top.

The club is excited about the prospect of the programme and is not yet satisfied with the outcomes. So much has been achieved already, but there is also so much more to come. The aspirations are big and the potential of the club equally so. Each day proves that barriers to entry can be broken and football made more accessible to all.

This season, with the performances off and on the pitch, the Women & Girls programme is demonstrating that the sky is the limit and it will be exciting to see what the future holds for all the girls.

Anyone who would like to sponsor a player, receive benefits, and support the Women & Girls programme should contact Sophie Mullet at sophie.mullett@ntfc.co.uk